CALL TODAY TO BOOK YOUR APPOINTMENT

Lt. Colonel Leonard A. Richardson, M.D. an internist, a flight surgeon and pilot, attended the Howard University College of Medicine from 1989 to 1995 and graduated with a MD degree. he then joined the United States Air Force where he served with distinction and received many awards and decoration.

He is the current President of Monumental City Medical Society in Baltimore, Maryland, an affiliate of the National Medical Association. He is also the President and founding member of the former Maryland Physician’s Group. Dr. Richardson interests include preventative care, and treatment of chronic disease (hypertension, diabetes, and hyperglycemia. 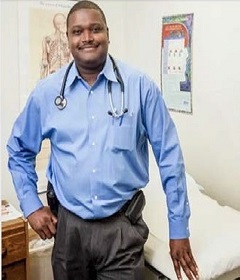